WHAT ARE UTERINE POLYPS? 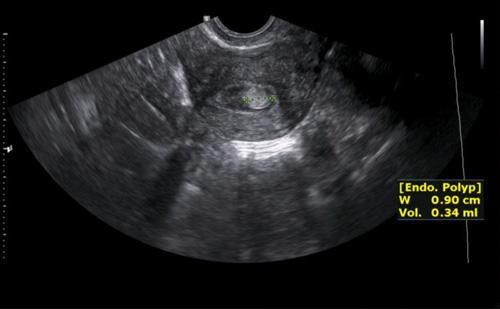 Polyp as Visualized by Transvaginal Ultrasound

When uterine polyps are small, they do not cause symptoms. As they grow bigger, they can push through the opening of the uterus and cause bleeding and cramping. Uterine polyps may also become infected if they are injured by tampons or during sexual intercourse. Polyps can cause infertility because they can cause an “inflammation” of the inside of the uterus which can affect embryo implantation. Uterine polyps can rarely be cancerous and are less common after menopause.

Protruding uterine polyps can be seen during a pelvic examination. Otherwise, diagnosis is made by a hysteroscopy, an ultrasound, a hysterosalpingogram, or a sonohysterogram.

In order to evaluate uterine polyps, typically a hysteroscopy and sometimes a D&C (scraping out the contents from inside of the uterus) is performed. A hysteroscopy is a procedure where a thin tube is inserted through the cervix to look inside the uterus. This is used to find and remove the polyps for a closer exam under the microscope. A procedure called a D&C may also be done if the hysteroscopy alone cannot remove the polyp or source of bleeding.

WHAT ARE UTERINE FIBROIDS?

Uterine fibroids are noncancerous growths of the uterus that often appear during your childbearing years. Also called leiomyomas or myomas, uterine fibroids aren’t associated with an increased risk of uterine cancer and almost never develop into cancer. As many as three out of four women have uterine fibroids, but most are unaware of them because they often cause no symptoms.

HOW ARE UTERINE FIBROIDS DETECTED?

Medical therapy and surgical procedures can shrink or remove uterine fibroids if you have discomfort or troublesome symptoms. Rarely, fibroids can require emergency treatment if they cause sudden, sharp pelvic pain. Uterine fibroids that are within the uterine cavity (submucosal fibroids) seem to cause the most problems for fertility patients and may decrease fertility and possibly increase the chance of miscarriage.

WHAT ARE UTERINE ANOMALIES?

Congenital uterine anomalies (birth defects of the uterus) are malformations of the uterus that occur in less than 5% of all women but have been noted in up to 25% of women who have had miscarriages and/or deliveries of premature babies. Many girls and women do not realize that they have a birth defect of their uterus unless they have had an ultrasound or an examination where it is discovered. The uterus and part of the vagina develop from two pieces of tissue on the left and right side of the body when a girl is still developing in their mother’s uterus. These two halves ( the right and left side) then come together in the middle to form one uterine structure. 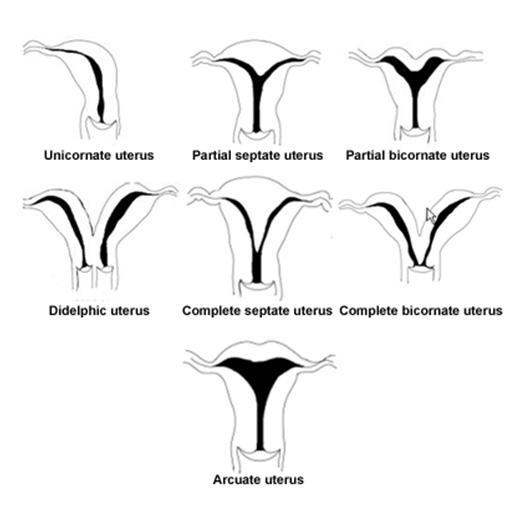 WHY DO UTERINE ANOMALIES OCCUR?

Most congenital anomalies happen because the two parts do not come together correctly. Different types of anomalies of the uterus have been identified and are described by how much fusion happened or did not happen.  Some women are born without a uterus. There may be a uterus only on one side (unicornuate), a double uterus in the middle (didelphys), or a partially split uterus (bicornuate, septate or arcuate). Some of these anomalies are fixable by a Fertility Specialist or Reproductive Endocrinologist.